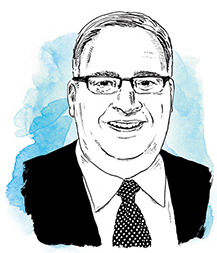 Keeping a safe distance from neighbors is a thing of the past.

When I first started in the water industry, I remember the general manager of the utility I worked for saying how one of his goals was for our utility to “stay out of the newspapers.” I also recount how terribly difficult it seemed for our utility to work with some of our neighboring utilities and authorities. Yes, there were agreements and obligations, but it was never easy. I suspect that 30 years ago this was fairly common among utility leaders. Provide reliable, steady service, keep rate increases to a minimum, stay within your own domain. Times certainly have changed, and the industry is at a point where we can no longer expect a business-as-usual approach.The issues facing the water industry are complex and gaining much attention, not just from industry leaders and local officials, but also from the media and general public.

The American Water Works Association (AWWA) publishes an annual report based on its State of the Industry survey. The survey polls industry leaders across North America. For the third straight year, the results indicate that business factors, infrastructure and regulatory issues remain the top three concerns.

It is no surprise that the recently released Black & Veatch report, “2012 Strategic Directions in the U.S. Water Utility Industry,” revealed similar results. When asked to rate the importance of major utility issues, survey respondents identified aging water and sewer infrastructure, managing capital costs and availability of capital as the top three.

The basic message coming from these two reports is simple. Utilities have an enormous amount of buried infrastructure to repair or replace and not enough money to make it happen in a timely manner. The numbers are staggering. AWWA’s “Buried No Longer” publication identifies a need for $1 trillion over the next 25 years to maintain current service levels. With this seemingly insurmountable problem, what can we expect to see from utilities?

First, a change in communications. Utilities are starting to see the need to do more public outreach and communications regarding the “value of water” story. Utilities will have to be able to sell their story if they expect to charge rates that reflect the true value and will provide the capital needed to make necessary improvements. As one general manager characterized it, “When I go to the public and ask for a 10 percent rate increase, I want them to say, is that enough, how about 15?” It may sound unbelievable that our public would ever embrace that kind of thinking, but that’s the vision that is needed. Look for utilities to increase their marketing and communications efforts and to figure out how to leverage the media, not avoid it.

Second, expect to see a bigger sandbox. We are already seeing a lot more regional coordination and collaboration. Expect this to increase, not just with utilities but also with universities, professional organizations and other groups affiliated with the water industry. Regulatory requirements and other factors continue to drive costs while conservation efforts limit revenue growth. Professional associations are seeing the same trend as the world around us transitions to an electronic and virtual society where paper publications and live conferences aren’t what they used to be. These changes are helping motivate more and enhance partnerships and collaborative efforts.

At the June AWWA Conference, Dallas Mayor Mike Rawlings spoke of recent successes that have resulted from regular meetings and increased cooperation with his two largest neighboring cities.

The days of trying to stay out of the newspaper and keeping a safe distance between you and your neighbors are gone. The water industry has always felt like a small universe, but just like our world, it’s getting even smaller every day.