Aging US Water Infrastructure: The Role of the Private Sector 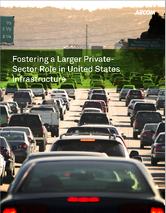 Water Design-Build Council member AECOM Technology Corporation, a leading provider of professional technical and management support services for public and private clients in more than 140 countries around the world, recently announced that it has published a white paper titled, “Fostering a Larger Private-Sector Role in United States Infrastructure.”

The paper examines the extent to which the nation’s infrastructure assets need urgent attention and/or repair as well as innovative funding mechanisms that can help address those needs, especially public-private partnerships (PPPs). AECOM supports the idea that PPPs, including design-build and construction management-at-risk models, can provide an important avenue for advancing infrastructure projects and, consequently, improving the country’s long-term economic growth, competitiveness and quality of life.

The water sector is amongst the infrastructure verticals that is in desperate need of repair and investent. We recently shared the following statistics in one of our blogs:

Regardless of which source you choose to believe, the reality is that there is a pressing need for immediate and significant investment in our nation's water and wastewater infrastructure. This investment simply cannot be met by the public sector along, making it critical that viable models of public-private partnership be tested and promoted.