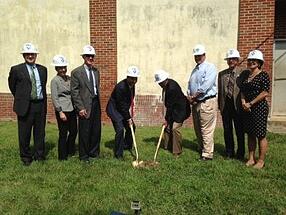 “I am so impressed with this facility and applaud the fact it showcases environmental efficiencies, increased cost savings, and improved reliability,” Mayor Michael Pantelides said. “I want to thank Public Works Director David Jarrell for producing a successful team consisting of staff, the design builder, and owner representatives, all working together to create a new state-of-the-art facility responsible for producing and delivering more than 1.5 billion gallons of water each year to our residents and businesses.”

In March 2013, the city awarded a contract for the design and construction of the new water treatment plant to WDBC members CDM Smith and Haskell (which have collaborated to form a joint venture), to be located adjacent to the existing plant.

Design-Build is a collaborative delivery process for construction projects. One firm, or team of firms, is contracted to perform all phases of the project, including site survey and investigation, design, permitting, bonding, construction management, and construction. Unlike traditional design, low bid, and construction, one design-build firm provides the client with a single point of accountability, allowing for construction-related input at every stage of the design, further reducing time and construction costs, and results in a design that enables the use of construction best practices.

In 2009, a comprehensive facility assessment indicated that the existing treatment plant was at the end of its useful life. The assessment noted that the plant has many critical pieces of equipment for which repair parts are unobtainable, and portions of the plant lacked redundancy. Based on a 50 year life cycle cost analysis, the City concluded that the most cost effective and risk minimizing option was to construct a new facility. The new plant is expected to be fully operational in early 2016.

“We are eager to start the construction phase of this project,” Public Works Director David Jarrell said. “After nearly six years of assessing the old plant, awarding the design-build contract, and designing the new plant, we are ready to start the 20-months of construction. We look forward to opening and operating the new state-of-art plant in 2016.”

In 1912, Annapolis was one of the first water systems in the United States to add a filtration system. At the time, the Maryland State Board of Health reported that Annapolis' water was far superior to that of Maryland’s largest city. In 1939, Annapolis drilled its first drinking water well and began mixing that with water from the reservoir.

In 1985, during water distribution repairs, the city discovered some wooden water pipes that were used to carry water to residents. It is estimated these pipes pre-date the Civil War. The filtration building was built in 1929 and this building is the main portion of the city's water treatment system still in use today.