Third-Party Contracting and Public/Private Collaboration Open the Door to Design-Build in the City of Quincy, Washington 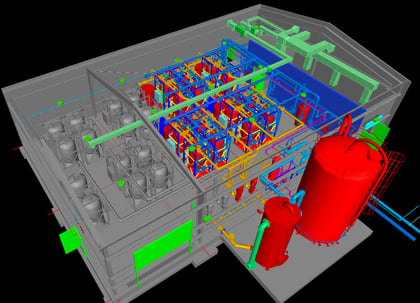 To maintain operability, data centers demand abundant amounts of low-cost power, reliable infrastructure, mild weather, low-risk seismic zoning, buried power lines and reasonably priced Greenfield land. Since 2006, these criteria have made the city of Quincy, Washington an ideal location for farming, food processing and data centers. Located in Grant County, the largest potato producing county in the United States, the city of Quincy is home to over 60 megawatts (MW) of server farms for Microsoft, Dell, Yahoo!, Intuit and others.

Additionally, Brown and Caldwell has worked closely with Quincy, Microsoft and multiple stakeholders to develop a new industrial reuse utility that benefits nearby businesses and industries. This project is unique in that the municipal utility relies on industrial water customers for its viability as the six data centers located in town support the agricultural economic base of Quincy.

Microsoft, which owns several major data centers near Quincy, has been a major stakeholder in the effort. In a move that will save millions of gallons of potable water for the local community, agricultural economic base, Microsoft teamed with the city to refine its water treatment infrastructure by building a multi-million dollar water treatment plant to support its data center. Brown and Caldwell negotiated a lease agreement between the city and Microsoft for just $10 a year.

This design-build project broke ground in September 2014, completed foundation work in October, erected the building in mid-December, and performed mechanical and electrical work in January and February of 2015. Relocating the water softeners is currently under way, with startup and commissioning on schedule to begin in April.

The system will be started up with a combination of potable water and Microsoft’s well water. Quincy plans to eventually switch the source to reuse water from its food processing wastewater treatment plant.

Mayor Hemberry noted that the utility will be designed for versatility to generate water types to support various industrial customers, both existing and future.