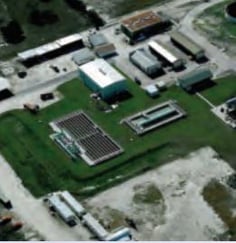 Located in the City of St. Mary’s, Georgia, the Point Peter Wastewater Treatment Plant was consistently experiencing flows of 1.2 mgd  and exceeded the capacity and 0.9 mgd discharge limits of its operating permit, primarily due to unanticipated development in the area.

To address this issue, the city embarked on an emergency upgrade of the Point Peter Wastewater Treatment Plant, doubling its capacity to 1.8 mgd. At the same time, this emergency upgrade needed to be completed on an accelerated schedule in order to avoid State fines. Immediately following the emergency upgrade project, the city then initiated a 4 mgd expansion of the WWTP to satisfy long-term capacity needs.

The city initially chose construction management at-risk (CMAR) delivery on the first project, with the objective to accelerate the project schedule by setting the guaranteed maximum price (GMP) prior to completing the design, thus expediting regulatory approval and permit acquisition, and releasing long-lead-time equipment early in the project.

The GMP was especially important because the City had secured municipal-bond financing based on an early estimate of probable construction cost prepared by the engineer of record. The financing plan was based on this strict construction cost, which could not be exceeded.

The city chose Haskell as the CMAR firm for the emergency upgrade; and then expanded Haskell’s CMAR contract to include design of all buildings, resulting in a progressive design-build engagement for a portion of the project, further accelerating project delivery. Haskell prepared milestone estimates and conducted value-engineering studies to ensure that project construction costs were kept below the city’s original estimate.

By accepting Haskell’s $1.5 million in value-engineering alternatives identified, Haskell was also able to save the city approximately $500,000 in sales taxes by suggesting and administering an owner direct-purchase program.


Successful Delivery of the Emergency Upgrade

The emergency upgrade was successfully delivered in less than 12 months, with the subsequent expansion completed in 21 months. Haskell returned to the City $425,000 when the emergency upgrade was completed and an additional $494,000 when the expansion was completed. Following completion of the projects at a total cost of $38 million, the City was never assessed any fines by the regulatory agencies.