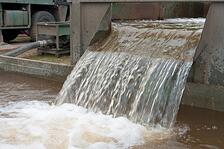 The city desired a single contract with a private company to design, obtain permits, construct, start up and conduct acceptance testing of the plant. A two-phase approach was used to select Black & Veatch and Western Summit Constructors Inc. (WSCI) as the design-build team for the 30-mgd, $41.8 million facility.

The proposal process included proprietary meetings with owner representatives to discuss the owner's needs and objectives. This early interaction between the city and the design-build team led to greater collaboration, innovation and equitable risk allocation for the project. After the contract award, the city and the Black & Veatch/WSCI team negotiated a final, open book, guaranteed maximum price (GMP).

Preliminary design and pricing were completed on a fast-track schedule. This made it possible to develop a GMP within five months of the notice to proceed, and final design and construction for a planned startup of the plant within 35 months. The basic structure, filters, chemical feed facilities, laboratory and administration facilities were combined into a single treatment complex building to allow centralized operation of the treatment plant.

This was a highly integrated team, with the city actively involved in all aspects of the project. Black & Veatch led the engineering and design aspects, procurement of the engineering equipment, on-site construction engineering, start-up supervision and performance testing. WSCI led the management of construction activities, including subcontracts for construction work. The city maintained the role of instrumentation and control designer.

The facility was completed two months ahead of schedule and $2.8 million under the GMP. The plant has consistently met or exceeded all drinking water standards and has demonstrated that it can operate at its rated capacity under a wide range of raw-water quality conditions.