Using Design-Build to Improve the Water System in Goodyear, Arizona 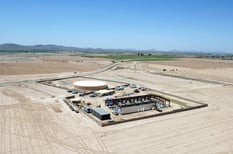 The City of Goodyear, Arizona, is one of the fastest growing communities in the U.S. with an average annual growth rate of 15 to 20 percent. With growth exceeding the existing infrastructure capabilities, the City developed a program to quickly grow their potable water delivery capacity.  The brackish groundwater from local perched aquifers also required treatment for potable use in most cases.

Next, the existing water treatment systems were surveyed and design-build team was tasked with the responsibilities of:

Converting existing agricultural wells was a quick method of delivering a large quantity of water. Hydro-geologists and engineers investigated a dozen agricultural wells to determine the feasibility of their use.  The Brown and Caldwell team installed a sleeve in one well, called Well No. 20, and converted the agricultural well into a 1,500 gpm potable water well to help meet peak summer 2006 demand. This well is high in total dissolved solids (TDS).  Water from the well blends with treated water to achieve acceptable TDS levels without additional treatment costs.

Brown and Caldwell was charged with replacing an existing water supply well being displaced by a road widening project.  Well No. 19 is a 1,200 gpm well that was constructed as an emergency project, which included decommissioning the existing well upon completion of the replacement well.

As part of this conversion, an existing City-owned surge tank was retrofitted and installed at the existing metering station facility.  This project required constant coordination with other design-build teams with adjacent and connecting roadway improvements, potable water distribution lines, and raw water transmission lines.

Brown and Caldwell installed a new 1,800 gpm well between summer 2006 and summer 2007.  Well No. 22 was located on existing City property located in close proximity to the treatment facility and Well No. 19 to reduce cost and schedule.  The well could only be permitted for a maximum 600 gpm average daily pumping rate, and was then determined that sizing the pump for 1,800 gpm would allow the City to meet their peak summer demands.

An operating procedure to limit use of the well during non-peak demand to stay below the permitted maximum was established.  Because the well is located near a residential development, consideration of noise levels was important. A submersible pump was considered, but was later determined that a sound enclosure over a vertical turbine pump would more efficiently reduce capital expenditures and operating costs, and address the noise issue.

The Bullard Water Campus treatment system was previously constructed as an emergency and temporary water treatment project.  It included four skid mounted RO modules located under a canopy with a finished water capacity of approximately 1.5 MGD.  Skids were preceded by an in-line sand separator and Amiad 10 micron filters.  Hydraulic, programming, and scaling problems plagued the system since it was constructed.

The process was addressed by rerouting the Amiad piping to eliminate the hydraulic problems, revising the ladder logic in the programmable logic controllers (PLCs) to provide smoother operation, installing acid pretreatment and caustic post treatment to minimize scaling, and replacing the existing membranes was enhanced. These enhancements boosted water production to more than 2 MGD.

Brown and Caldwell was then contracted to design and construct the Bullard Water Campus permanent treatment facility.  This facility was completed in phases, and progressively moved from a redundant system to a complete replacement of the previously constructed temporary facility.