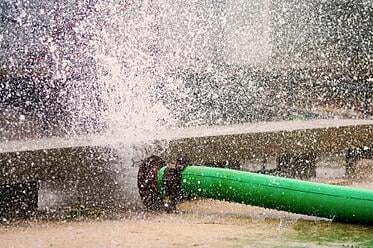 Once buried issues, potentially crippling effects of aging water infrastructure have started to come to the surface.

An April report from the EPA showed $384 billion was needed for repairs to U.S. drinking water infrastructure by 2030. This figure is up sharply from the $225 billion estimate EPA issued in 1999. The biggest chunk of investment, $247.5 billion, is estimated for distribution and transmission repairs and improvements. Another $72.5 billion is estimated for water treatment infrastructure, according to the EPA’s fifth “Drinking Water Infrastructure Needs Survey and Assessment.”

The more than $150 billion increase in capital needed to fix aging buried infrastructure by 2030 is most likely the result of “economic stress and an out of sight, out of mind” mentality among community leaders and residents, said David Egger, Senior Vice President and Executive Managing Director of the Technical Solutions group for Black & Veatch’s water business.

Egger said too much of the public does not fully understand the value of water and the services that utilities provide. “A one-day outage is generally tolerated, but as infrastructure continues to deteriorate, extended periods of low-water pressure, boil orders and emergency shutdowns are likely forthcoming,” Egger said.

While water utilities across the U.S. know there is a problem with aging underground infrastructure, the biggest problem for most of them is finding the resources to address it, said Ahmad Habibian, Ph. D., Technical Specialist for Black & Veatch’s water business.

“The money isn’t in their hands to make all of the improvements at once, forcing many utilities to focus on urgent needs first,” he said.

Rate increases aren’t high enough to make significant infrastructure improvements, said Joseph Mantua, Client Director, Black & Veatch’s water business. That’s because the cost of safe, reliable water has in the past been based on consumption and not on the true value of the natural resource.

“There’s always been this expectation that it’s going to be as cheap as possible, and you’re always going to keep your costs down to cover the basic services and repairs,” Mantua said. “However, that mindset needs to change to take into account the value of a reliable water delivery system and the upkeep of its infrastructure, including major capital improvements.”

As demonstrated in the EPA report, the costs to make repairs will only continue to climb as systems age and deteriorate, Habibian said.

“In addition, population growth will further increase the demand for safe, reliable water services,” he said. “Hence, utilities have no choice but to address the funding shortfall through rate increases or innovative financing options in order to maintain the level of service provided to customers.”

Egger said when policymakers ask their constituents to agree to rate increases for rebuilding and repairs, they’re often faced with the argument, “Well, haven’t you already been doing that?” He said the best way to combat that sentiment is through education and revamped media campaigns — articulating to ratepayers why problems exist, the potential consequences and the importance of investing in water infrastructure.

In fact, more education seems crucial at a time when nearly 60 percent of ratepayers don’t understand the costs of providing safe and reliable water services, according to respondents in Black & Veatch’s 2013 Strategic Directions in the U.S. Water Industry report. On the other hand, nearly half of water industry professionals believe their customers would be willing to support improvements through rate hikes.

Projected rate increases, however, might still not be high enough to make proactive investments in aging water infrastructure, according to Greg Kail, Director of Communications for the American Water Works Association.

“Most consumers will tell you that water is very important, but many of them do not think much about what it takes to manage, treat, test and deliver it,” he said. “When we in the water profession observe that people do not value water, often what we are really saying is that people are not willing to pay the true cost of providing water service.”

Communicating the Value of Water

To effectively communicate the value of water, Kail said it’s important that utilities relate messaging to ratepayers at “places they intersect with water.” Those areas might include water’s value in washing clothes, making coffee, cleaning vegetables or fighting fires.

“We can help them understand that water is so integral to all we do, consume and manufacture, that we can never truly pay for its value — but we most certainly can afford its cost,” he said.

“Black & Veatch can help utilities by explaining the risks of not improving aging infrastructure, such as significant economic consequences, environmental hazards and dangers to human health,” Mantua said. “Utilities can basically tell their customers ‘you can pay me now, or you can pay me later.’ Either way, it’s going to cost their customers a lot more when a main breaks versus taking care of infrastructure up front.”

In addition to help in educating the public on the value of water, today’s water utilities need support in prioritizing needs, such as which infrastructure improvements must take place in five to 10 years, and which ones are longer-term projects, Habibian said.

After all, Mantua said, the United States finds its water infrastructure in its current condition largely because formal asset management practices are still relatively new to the country.

For many years, Hong Kong has been investing capital into its aging water mains assets, according to Alan Man, Vice President and Managing Director for Black & Veatch’s water business in the North Asia Pacific Region.

The Water Supplies Department (WSD) in Hong Kong introduced a program in 2000 to reduce leaks and attain network improvements. A variety of measures have been assessed and prioritized to target a cut in water loss rates from 25 percent in 2001 to 15 percent by 2015. These include active leakage control through advanced pressure management and district metering schemes as well as an ambitious program to repair and replace almost 3,000 kilometers (1,864 miles) of its water mains.

“Hong Kong is clearly turning the tide because of prioritized investments in its aging water mains. There are real long-term benefits from a large-scale and systematic approach,” said Man. “WSD is experiencing reduced operational and maintenance costs, and the public is experiencing less disruption from bursts and leaks.”

“All the initiatives are major components of Hong Kong’s Total Water Management strategy,” concluded Man. “The key to the program’s success is that it is founded on a clear vision and disciplined approach to optimizing the utility’s existing assets.”