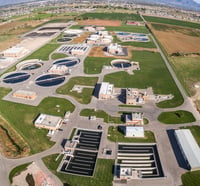 With Utah’s population expected to nearly double by 2050, several of the biosolids treatment processes at or over capacity, and outdated technology hampering overall efficiency, North Davis Sewer District (“the District”) needed to expand and improve its facility.

In 2010, the District hired Brown & Caldwell (BC) to complete a Biosolids Master Plan, which included recommendations to handle projected future solids production, increase capacity, and significantly increase energy efficiency. Due to BC’s familiarity with the plant and proven performance, BC was rehired in 2012 to bring its recommendations to life through a $58 million capital improvement project.

When it came time to choose a delivery method, the District wanted a team that was qualified, offered a single point of responsibility for design and construction, would provide high-quality workmanship, and would collaborate throughout. The District was ultimately drawn to the progressive design-build delivery method to achieve these objectives. Tight collaboration with the District was critical to designing around their specific preferences for equipment selection, configuration, control, and functionality. BC also performed open book and transparent guaranteed maximum price negotiations, enabling the District to have an earlier understanding of construction costs, along with greater control over scope and equipment selection.

To maintain cash flow and maximize local involvement, the program was broken down into three projects/phases:

Phase 3 – New Cogeneration Facility: The District was committed to significantly reducing the plant’s reliance on coal-fired power and using their biogas waste as a renewable energy source. To accomplish the District’s sustainability goals, a new combined heat and power system was constructed along with other process improvements to generate renewable electricity from the biogas and provide thermal energy for process heating needs.

Phase 3 included the installation of two new, high-efficiency, 1,100 kW Advanced Reciprocating Engine System lean-burn engine-generators, which operate at over 40% electrical efficiency, a 36% increase over the previous engines. The increased engine size and efficiency allows the plant to fully utilize biogas for 100% of the plant’s process heating and up to 90% of the total plant’s power requirements, now and into the future. Additionally, air emissions were significantly reduced allowing the District to remain below the threshold of a major source classification. This achieves a net greenhouse gas reduction while turning waste into electricity.

The District’s expectations for budget and schedule performance were exceeded when construction was completed on schedule and $5.8M under budget. Total project cost savings gained through progressive design-build innovation is estimated at more than $30M, achieved by avoiding the need for two new digesters that were included in the original scope, reusing existing tanks and covers, and an efficient procurement plan.

About Brown and Caldwell

Serving clients locally and globally from 45 locations, Brown and Caldwell is the largest engineering consulting firm solely focused on the U.S. water and environmental sectors.

Passionate about delivering exceptional service, collaborating with clients, adding value through innovation and building relationships that last, Brown and Caldwell offers a comprehensive range of engineering, scientific, consulting and construction services with all the essentials for a successful project and a standout experience.

For more information, visit the Brown and Caldwell website.