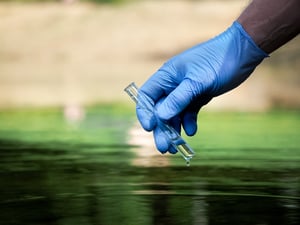 In June of 2013, utility managers at the Anderson Regional Joint Water System (ARJWS) in Anderson, South Carolina, began experiencing intermittent taste and odor impacts to their finished potable water. This led to customer complaints and public relations challenges for the utility. The problems were due to the increasing occurrence of algal blooms in their source water body, Lake Hartwell.

Geosmin and 2-Methylisoborneol (MIB) are naturally produced by cyanobacteria (blue-green algae). These compounds have an earthy taste and noticeable musty odor even at low concentrations (<10 ng/L). Concentrations entering the plant in the summer of 2014 were in the 300 to 700 ng/L range, and action was needed in order to continue to offer palatable water to consumers. With algal blooms increasing in duration and frequency throughout the region, it was clear that the problem was unlikely to subside in the foreseeable future. Algal blooms can also sometimes produce toxins that are harmful to humans and animals even in low concentrations, so there was no time to waste.

The ARJWS Lake Hartwell Water Treatment Plant (WTP) initially used various recommended best practices, such as copper- and peroxide-based algaecides for in-lake treatment, and the addition of powdered activated carbon and chlorine dioxide within the treatment plant to adsorb and oxidize the objectionable compounds. However, these techniques proved to be limited in their ability to remove the taste- and odor-causing substances at the high and increasing concentration levels occurring.

As a result, utility managers took decisive action against this emerging threat to their water quality, hiring an engineering consultant to implement an upgrade to the WTP using the construction management at-risk (CMAR) project delivery method. The CMAR project delivery approach was chosen to ensure success, meet the aggressive schedule, and provide the most value through a collaborative relationship among the designer, builder, and equipment supplier. The goal of the WTP upgrade project was to implement a treatment system upgrade to eliminate seasonable taste and odor events, color associated with naturally occurring iron and manganese, and establish resilience against algae-linked compounds and other contaminants of emerging concern (CECs).

A three-phased approach was quickly developed to select the optimal treatment technologies, and the CMAR group teamed up with Xylem, Inc., to provide treatability testing of four Advanced Oxidation Process (AOP) treatment alternatives:

This comprehensive and formulaic approach combined with the capabilities of Xylem’s AOP treatability testing lab led to the selection of the ozone + peroxide AOP process. This process was considered the most viable option to address current and future taste and odor, color, and CEC impacts for the lowest combined capital and operating costs over the expected project life.

As the project moved into the design phase, Xylem was selected to provide the full-scale system, due to their ability to provide a cost-effective, reliable solution on an accelerated timeline. Xylem also ensured optimization of the overall plant upgrade design concurrently with the equipment manufacturing process.

The $13 million upgrade project was completed ahead of schedule and under budget, coming online in the spring of 2018, just in time for the beginning of the seasonable algal blooms. ARJWS confirms zero complaints related to the new system have been received from their 15 member agencies, and all 200,000 drinking water consumers throughout Anderson and Pickens Counties are looking forward to great water quality in the coming years.

Steve Green is the Water Utilities Business Development Manager for Xylem Inc., based in Portland, Oregon. Steve’s focus is to grow and maintain Xylem’s reputation as the best-in-class provider of water and wastewater technologies and services to municipal clients in the Americas region.